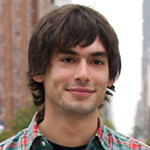 RAMCloud is a scalable, high-performance, general-purpose storage system which keeps all data in DRAM at all times. Our goal is to make it easy for developers to harness the full performance potential of large-scale DRAM storage. RAMCloud fetches data in 5-10 microseconds, it's durable and available, and it's designed to scale to thousands of servers. If successful, RAMCloud will enable new applications that manipulate large-scale datasets much more intensively than has ever been possible before.

This talk will give an overview of RAMCloud and its most unique research ideas:
* It structures its memory and backups as a log, enabling fast write performance, high memory utilization, and durability.
* It recovers failed servers in 1-2s and does so using cheap disks rather than expensive DRAM-based replication.
* Its name server relies on a new consensus algorithm called Raft, which is equivalent to Paxos but designed for understandability.

발표자 소개
Diego is a PhD student in Computer Science at Stanford University, where he researches distributed systems with Professor John Ousterhout. His research projects include RAMCloud, a scalable high-performance storage system; Raft, a new consensus algorithm designed for understandability; and LogCabin, a new coordination service built on Raft. His thesis topic involves bridging the theory and practice of consensus algorithm. @ongardie on Twitter.
강의대상